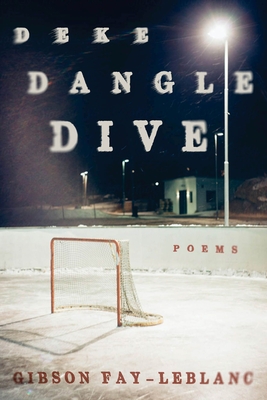 
Usually Ships in 1-5 Days
What is a person to do upon finding out that his older brother has six months to live? What is a father to tell his young sons about the everyday violence, inequities, and injustices of the world? What is a husband to do when confronted with his domestic foibles and failings? What can poems possibly offer us in the face of unanswerable questions? Deke Dangle Dive explores illness, fatherhood, brotherhood, and masculinity through a variety of lenses, including ice hockey, contemporary culture, and the natural world. This unique collection considers how poems can speak to us and through us when all seems lost.
Gibson Fay-LeBlanc is the author of Death of a Ventriloquist. His poems have appeared in Guernica, New Republic, Tin House, jubilat, FIELD, and the Literary Review. He currently serves as executive director of the Maine Writers & Publishers Alliance and lives in Portland, Maine with his family.
“In long and short forms, free and metered and rhymed, Gibson Fay-LeBlanc’s Deke Dangle Dive is a gorgeous, powerful, and playful self-reckoning. With an ear deeply attuned to the verbal music of Frost and Heaney, spiked with a dash of Hopkins, and taking its metaphors and much of its matter from the hockey rink, Fay-LeBlanc faces the facts of middle age, of the practice of poetry, of raising two boys (‘It’s so easy/ to make broken people’) and working to keep a marriage sparked while circumstance hands out its humilities. It’s also a reckoning with a brother’s illness (‘I want, I want // my brother's cells to stop their war/ on each other’) and with the broken family of origin whose rules take a lifetime to untangle: ‘I who so often/ shut my mouth/ too early/ mean to/ keep on talking,’ says Fay-LeBlanc, intent on saying what hasn’t been said. But there is as much hope and consolation in these poems as there is wariness and weariness. Life’s not a game, but there are games to play, channels for all the rage and fear, moves against the uncertainty. Feel your heart lifted as this poet shows what sports and poetry have to teach one another: ‘Is this such bad training for what is to come?’”
— Craig Morgan Teicher

“I don’t know what to praise more, the vivid and bracing language of the poems in Deke Dangle Dive, or sense of life that language delivers, a life fully lived and examined in all its rich complexity. Hockey is, as one poem says, a way of ‘humbling yourself to the rules of the game’ and that also goes for the making of art, and beyond that the process Keats would call soul making, acknowledging the longing, love and grief that make us human. For Gibson Fay-Leblanc that involves exploring what it means to be a husband, father, son, and to confront the serious illness of a beloved brother. If the poet knows that the form ‘can never be close enough to the actual,’ still when poems are as beautifully made, as emotionally compelling as these are, they seem to pulse with life and pass that life on to us, through words that do indeed ‘land in the gut’ and ‘shiver the ribs.’”
— Betsy Sholl

“Deke means to trick or feint, dangle means to hold out in temptation, and dive means to fall from a great height. Gibson Fay-Leblanc’s poems do all three. Sometimes at once. These are poems of risk and reward, of loss and labor. They present themselves as stories of hockey and poetry and love—fatherly and familial—but they always have another trick ready. Fay-Leblanc’s second book proves he is a magician within ‘this brutal, beautiful game.’”
— Jeffrey Thomson